So, the Covid-19 lockdown was over. So many things had been missed and cancelled throughout the year; it was time to catch up.

We had visited Staithes briefly on a previous trip up the north east coast, now it was time for a proper exploration with three days booked in Coble Cottage, overlooking the harbour.

We left Hull mid morning on the Friday. It was a pleasant day, warm enough for shorts despite the lateness of the season. Pausing to refuel at Beverley (our beer supplies were getting low), we then set our sights on the B1248 and headed for Scarborough, then on through Whitby, arriving in Staithes just after 2pm. 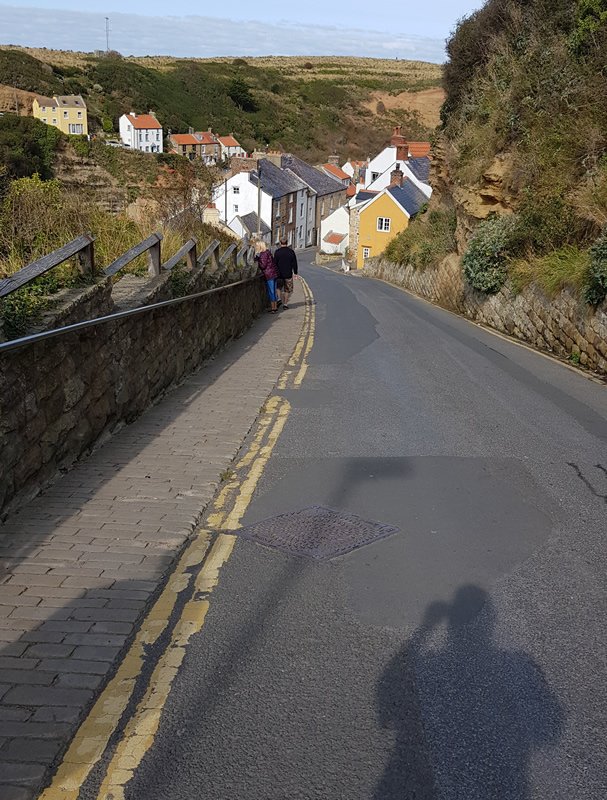 On arrival we passed the Captain Cook Inn, where we had booked a meal for the next day, and then descended the steep hill into the harbour. We were going to have to climb back up this to the car park after unloading. The road was narrow and roughly cobbled, with many tourists having to step aside to allow us passage.

Coble Cottage, although an eight sleeper, was fairly cramped for space. It was pleasant clean and tidy though, and lacked for nothing but space; we couldn’t actually get through the doorways while carrying boxes. The electrics were a bit scary however, with many spurred and double sockets, overloaded with plug adapters and endless cables. The place looked like an electrician’s nightmare.

A short afternoon stroll took us up a steep hill and onto the heights of Cowbar Nab, which afforded us a spectacular view across the bay.

After that short walk, we tried unsuccessfully to go for a refreshing pint in the Cod & Lobster. People were queuing at the door so we settled for one of our own beers, sat on a bench overlooking the harbour as we wrapped up against the evening chill.

Back to the cottage for a relaxing evening, we dined on a delicious homemade Chicken & Chorizo casserole. It was accompanied by a sourdough bread, spread with £5 a block of ‘raw butter’ from the local deli, and washed down with bottle of full bodied red.

Saturday’s first job was a trip to the village butcher. We took the adventurous way round, exploring some of Staithes labyrinthine 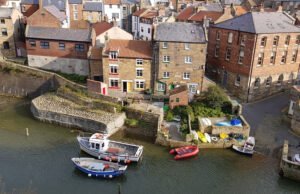 passageways and actually managed not to get lost.

It was then up the hill that passed our cottage and onto the Cleveland Way for the day’s planned walk. Up onto the clifftop with a 137m climb where warm sunshine battled a chill wind for supremacy. I’d half expected to be pretty much alone up here but there were hundreds of people in an organised race all the way to Filey and many other tourists beside. We covered four miles, up and down some pretty steep gradients, had lunch in the grounds of a church; then made our way wearily back down to Staithes.

Showered and rested, our aching limbs were dragged up the hill again for our booking at the Captain Cook Inn. We were shown to a small table at the back of the pub in the pool room. The pool table had been pushed aside. There were a number of loud and well lubricated people, some of whom were vaping, and a couple of dogs. It was clearly not a dining room and the seats we had didn’t even have backs on which to hang our jackets. We were not impressed. Things didn’t improve when the young barmaid came to our table and confessed to not knowing what ales were on the bar. She then pulled a small piece of card out of her pocket with drinks written on, and proved to be clueless when we asked about them. Despite having numerous notices about social distancing, our table was right next to the open doorway where people were regularly passing through on their way to the slamming exit door. We decided against eating, ordered a half pint each, and made a swift departure.

There was nowhere else to eat, but luckily we found a chippy further up the road. They were extremely busy with orders and at first told us we couldn’t be served unless we had already ‘booked’. Thankfully the guy who ran it said he could squeeze two more orders in if we didn’t mind waiting ten minutes. What could have been a disaster was rescued by some superb fish & chips. They were enjoyed on a bench with the surreal entertainment of three people in a hot tub, sat in their front garden overlooking the main road, while a neighbour complained to them about some apparent miscreants he had seen in the garages at the rear.

We headed back to base and tried to ease our stiffening limbs with a few glasses of chilled white. 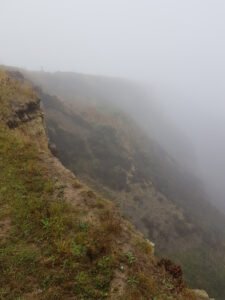 On Sunday we drove a couple of miles further north to start another coastal walk along part of the Cleveland Way up to Boulby Cliff (the highest point on the east coast). It wasn’t a long walk but the going was very hard. The climb was pretty steep in places, the weather wet and misty. At one point we felt we were actually walking through the cloud.

Walking back down Boulby Bank on our return, the tarmac road was deceptively steep. There was one stretch where we were both practically running down it. It felt as though gravity was in a hurry to get us to the bottom.

The weather had cleared by the time we got back to base, though it was chilly. After showering and 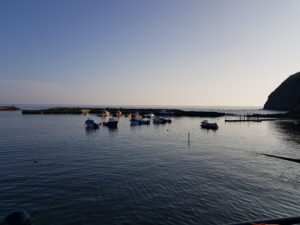 changing we decided to take a glass of beer outside and sat watching the goings on around the harbour. We were kept thoroughly entertained by the antics of a few dogs on the beach, one of the best laughs I’d had in ages.

Then it was back to the cottage for a lovely slow-cooked lamb Stifado and our final evening in Staithes.

We had to be out of the cottage fairly promptly on Monday morning. Jill was worried about the time, so I decided to head up the hill to the car park while she got herself ready. The climb up the steps was exhausting, so I stopped part way up to see if I had a phone signal and catch my breath.

When I checked my phone I was peeved to realise that Jill had sent me out an hour early. For some reason her phone was showing European time. There was no point in going back down and all the way up again, so I collected the car anyway and drove it down into the village ready for loading.

As we had time to kill I suggested a visit to Saltburn as it was only 9 miles further north. It turned out to be one of the best decisions I have made.

The weather was glorious, the drive entertaining, and as we got out of the car a man came over to us. “I don’t know whether you saw on the way down,” he said, “but there are some dolphins in the bay.”

We quickly dug out the binoculars and made our way along the seafront to the pier. What a spectacle! For 30 or 40 minutes we watched a large pod of dolphins at play. There were several groups, and every so often one or two would launch themselves into the air. I had caught a few glimpses of these creatures during our Scottish holiday but this was something special.

We hadn’t had the chance for a proper breakfast so decided to treat ourselves to one at a cafe with a balcony which offered a sea view. The full English was quite pricey at £9, but boy was it worth it! Crispy bacon with a rack of perfectly cooked vine tomatoes, sausages, eggs, beans, the tastiest, crispiest back pudding I have ever had and a ‘funky hash brown’ that was to die for.

The visit to Saltburn more than made up for the early morning rush; and we even had time for a leisurely visit to Thornton Dale on our way home. 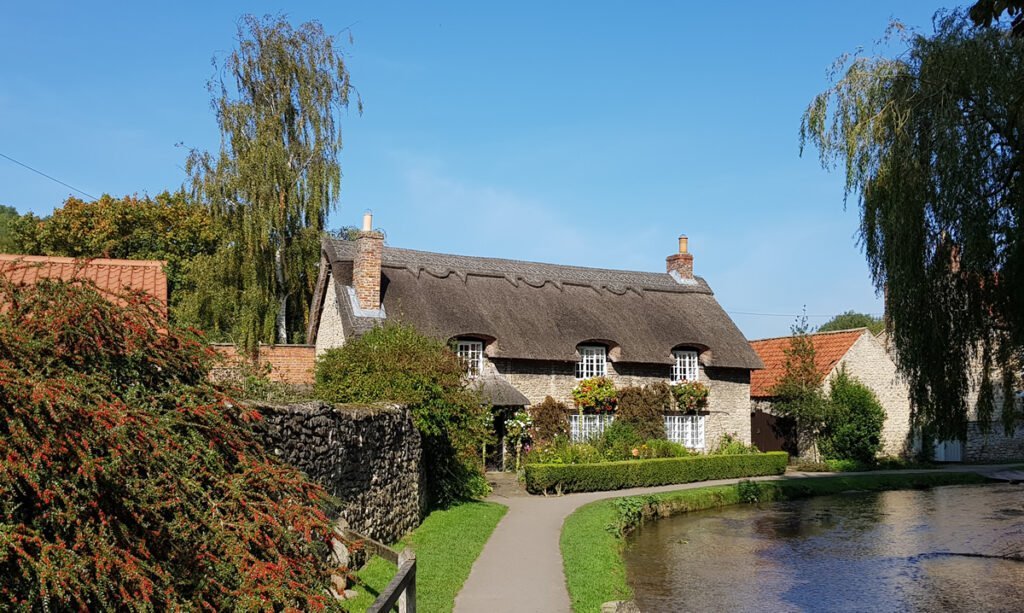 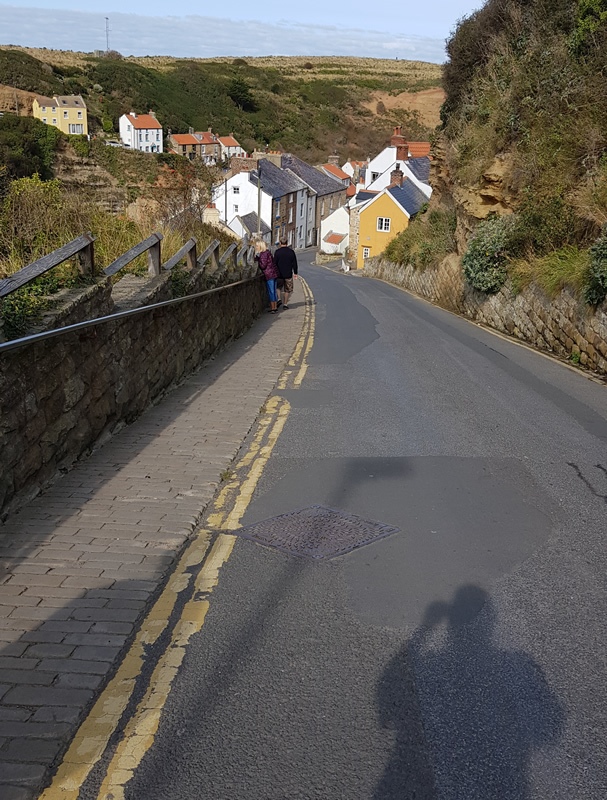 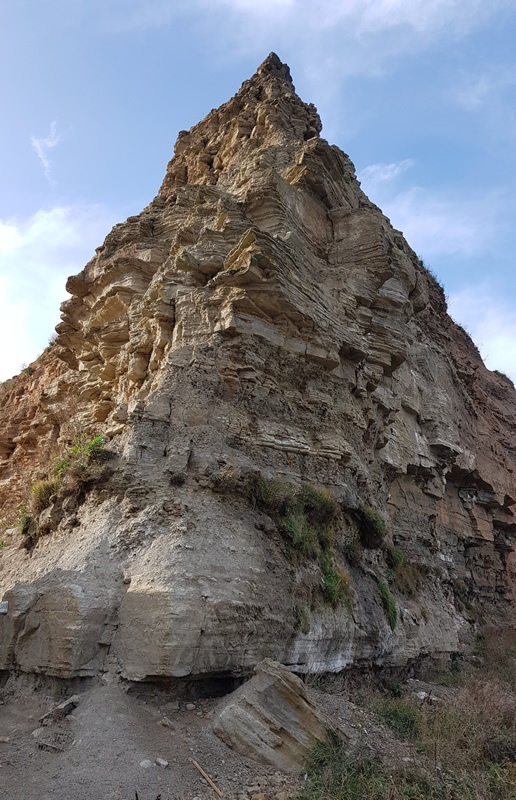 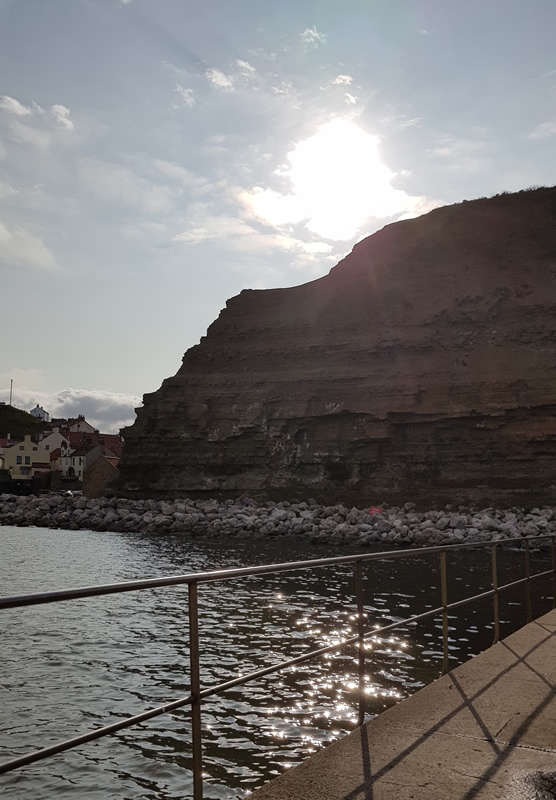 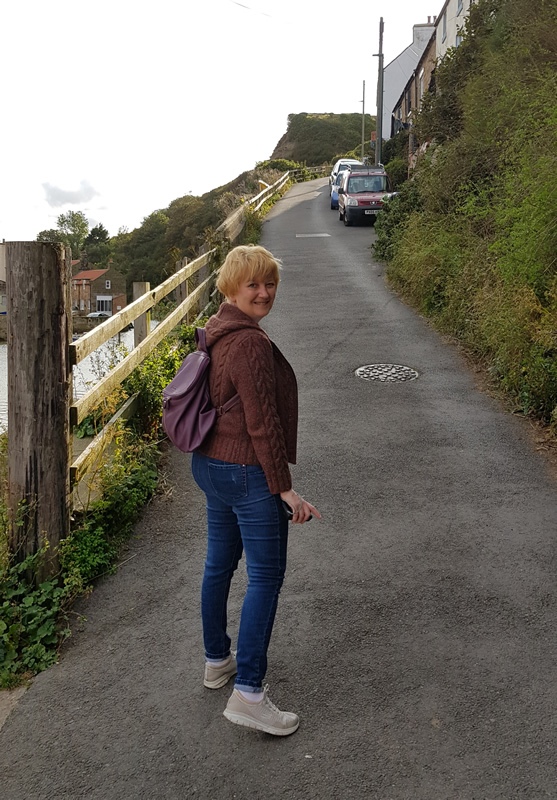 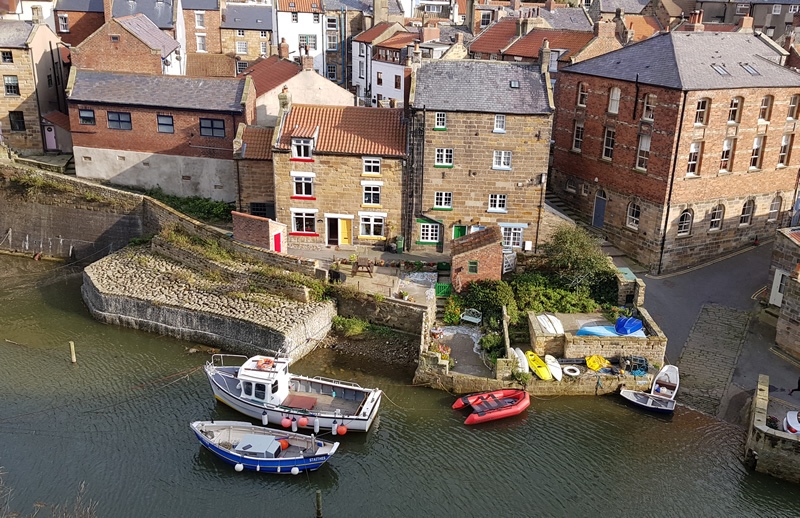 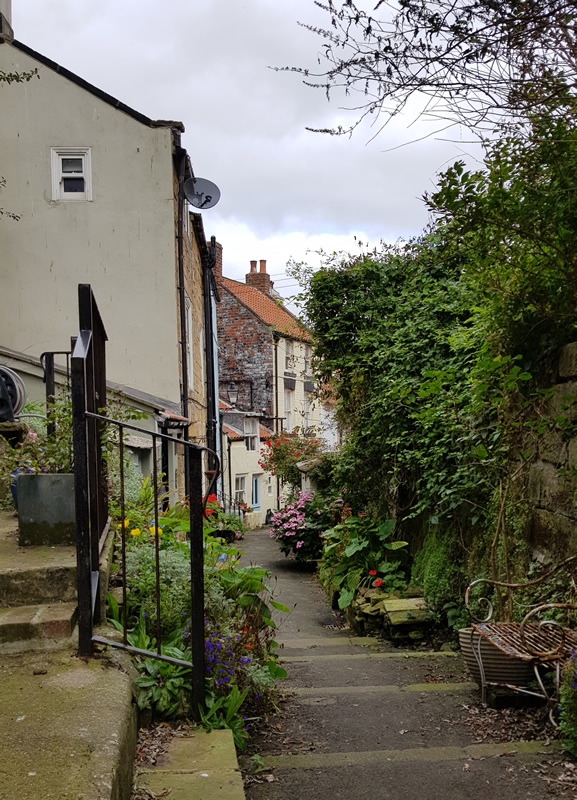 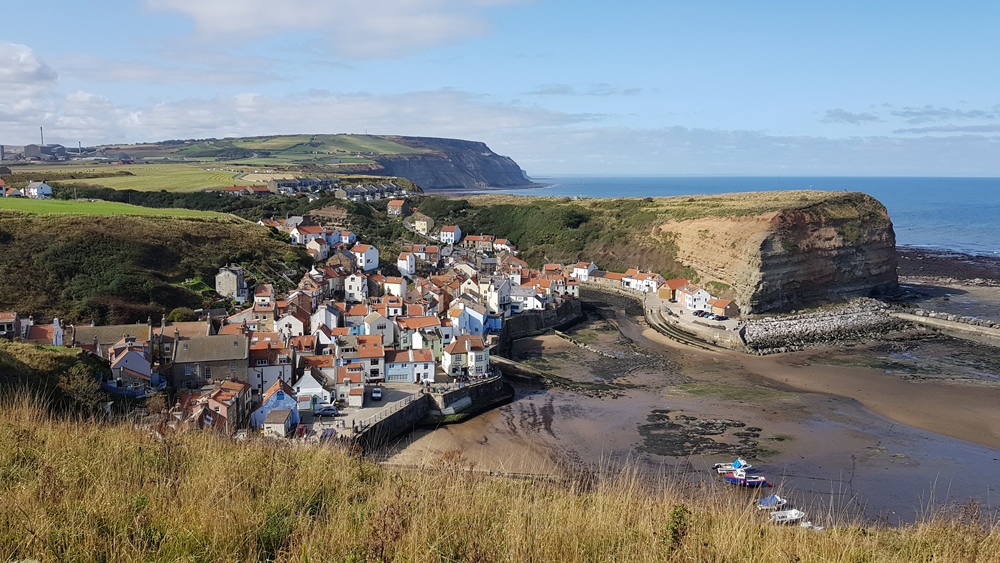 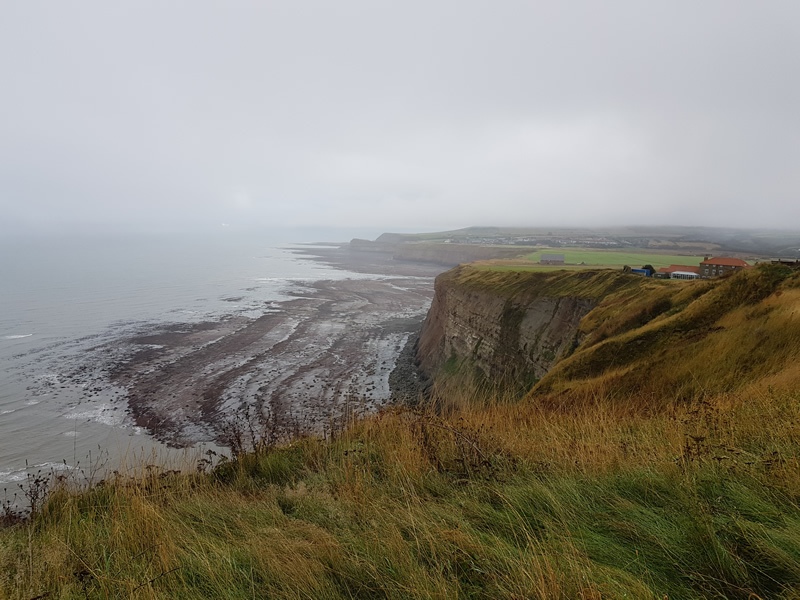 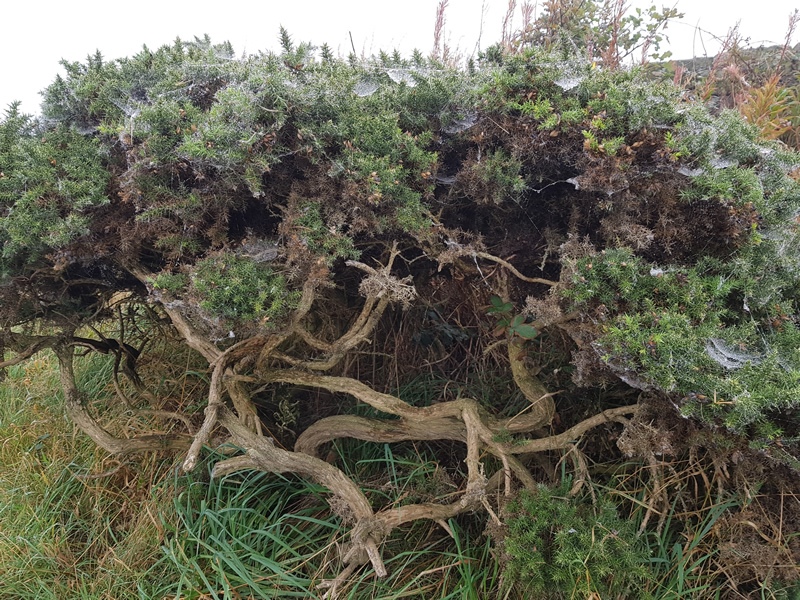 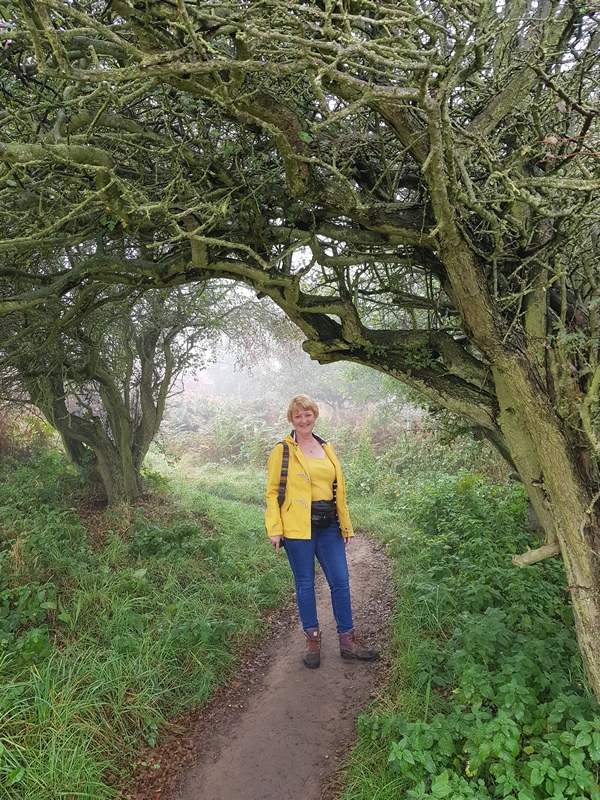 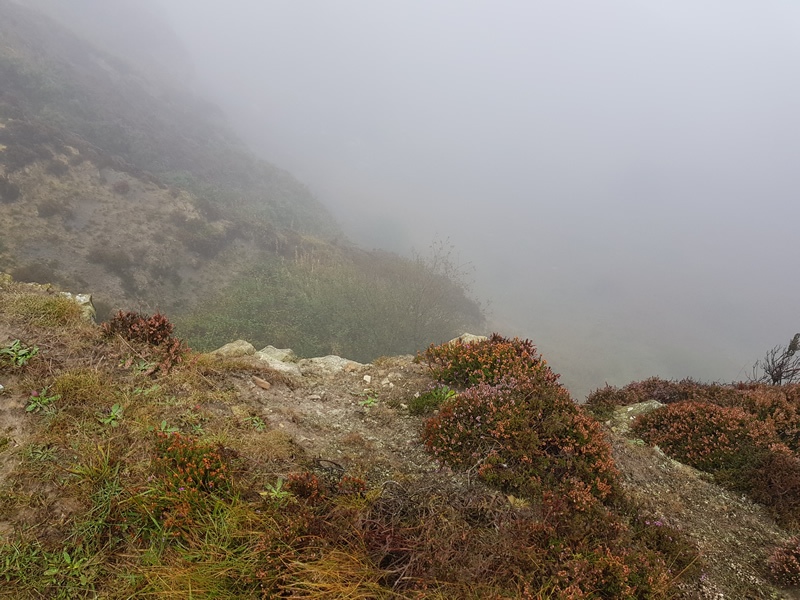 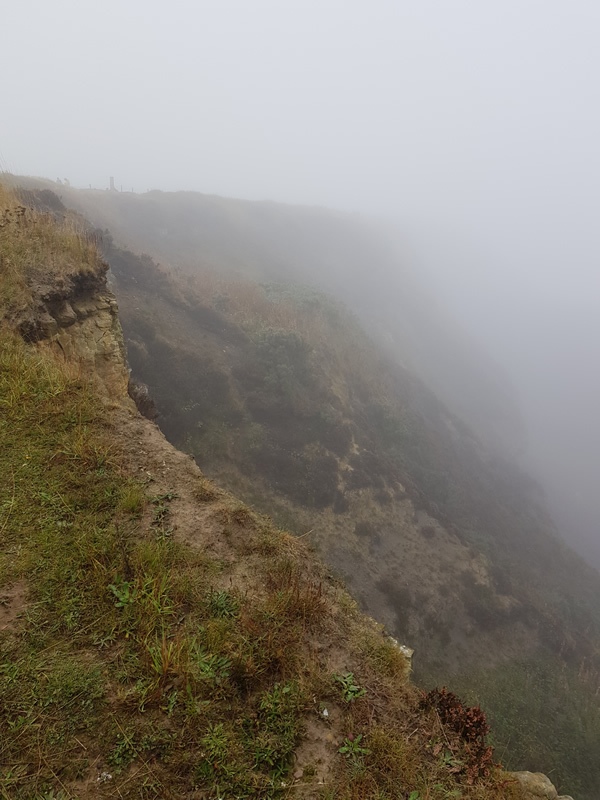 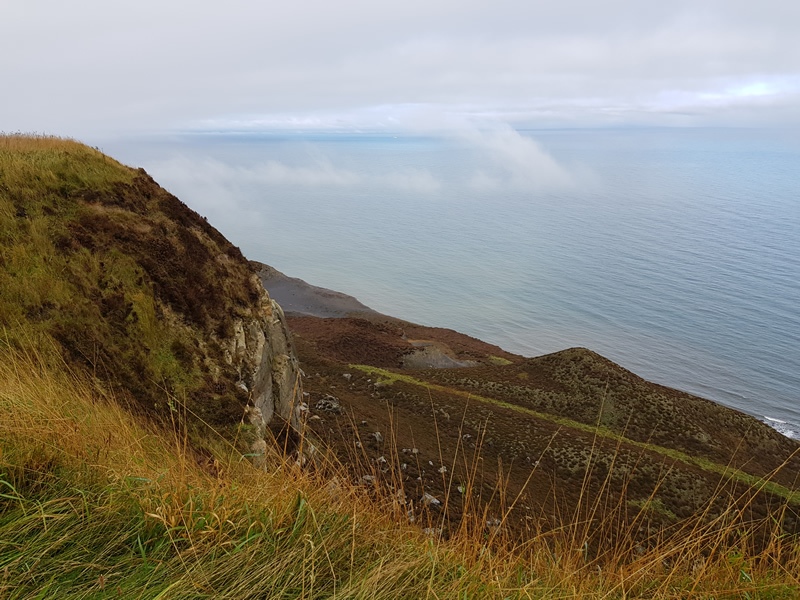 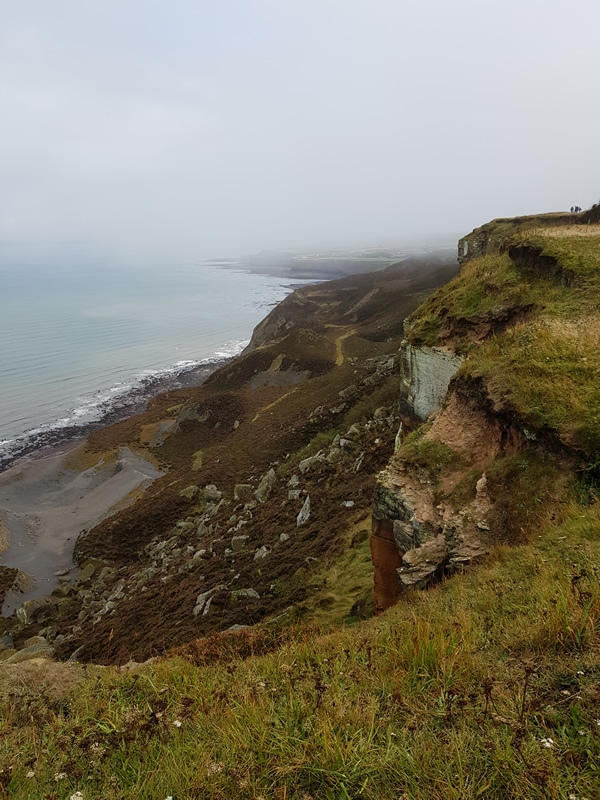 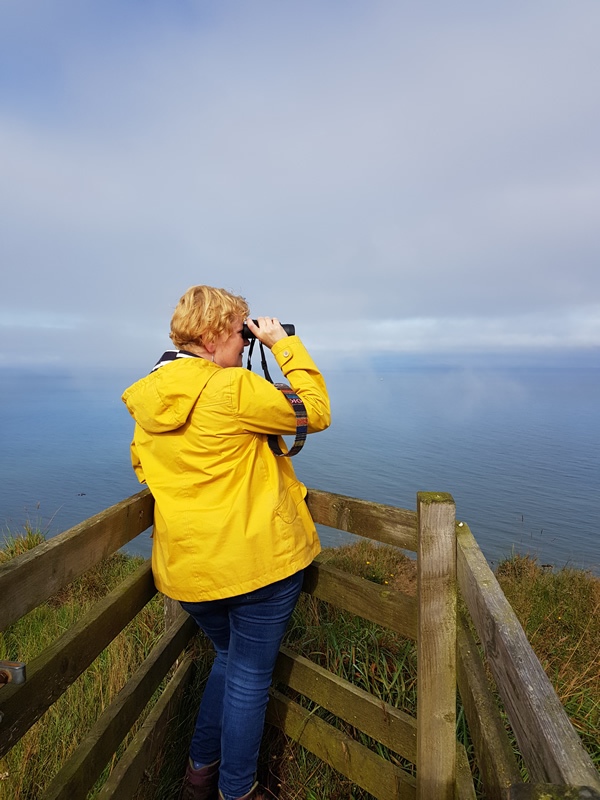 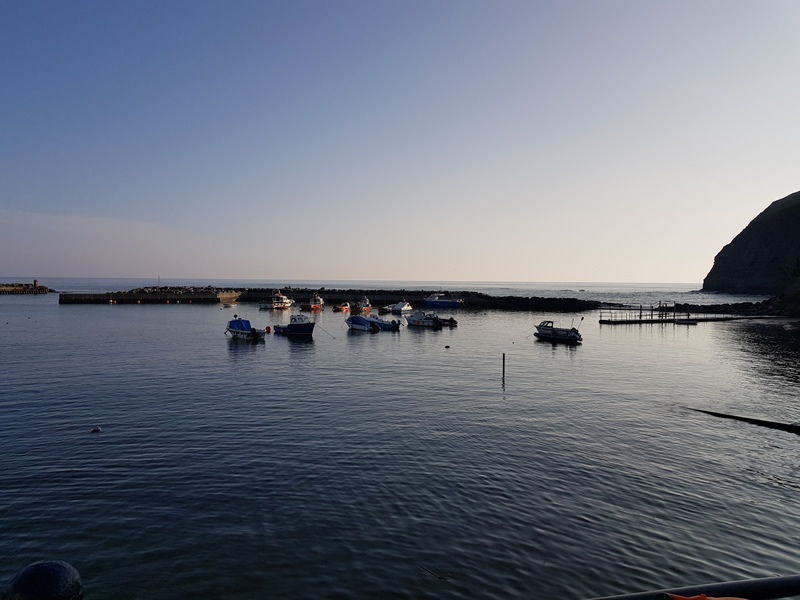 Staithes is a lovely old place, full of character and charm. And hills. Did I mention the hills?