The Knife Angel was created by sculptor Alfie Bradley at the British Ironworks Centre in Oswestry. The work is a memorial to those whose lives have been affected by knife crime and violence on the streets of Britain. The angel is 27ft high, and has been designed and created by Alfie using over 100,000 knives which have been surrendered and collected in nationwide amnesties across 2015/16. The Angel was initially displayed in 2018 outside of Liverpool Cathedral, in order to raise awareness of the impact of knife crime on society.

The Angel is now doing a tour of Britain, and here we see it in the ‘Rosebowl’ of Hull’s Queen’s Gardens. There was a surprisingly hushed atmosphere around the sculpture, its impact on those around it obvious. Some of the blades were inscribed by friends and relatives of victims, the words bringing tears to the eyes of those who were brave enough to read them. 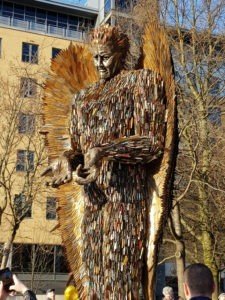 Rarely have I been moved by a piece of sculpture, but Alfie has created something here which is extraordinary. The expression on the face of the Angel conveys a mixture of pain and compassion, surrounding by all the lethal blades which are now being held safely under its protection. I have to confess to having a tear or two in my own eyes as I walked around this, and I challenge you not to be moved should you be lucky enough to come across this masterpiece yourself. 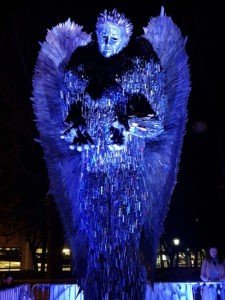