Our first cruise holiday, joining up with Coral and William on the MSC Opera on an all inclusive trip sailing up the Norwegian coast. 7 nights aboard a gleaming aquatic hotel with 8 decks, half a dozen bars and lots of food to play with.

We decided to break up the long journey with an overnight stay in Oxford, booking a Travelodge next door to a park and ride so we could go for a few beers in the centre. Drinks were a bit pricey here but nothing like the financial shock yet to come in Norway.

After a pleasant overnight stay it was off to Southampton next morning where we joined the long queue of people waiting to board the ship. 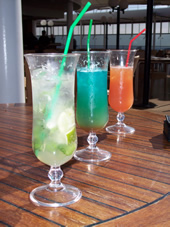 The cabins were a pleasant surprise, not overly large but nicely presented, our cases soon arrived and we all gathered on deck for our first drink and to wave goodbye to Blighty.

Ijmuiden
Next day the Dutch port of Ijmuiden was the first port of call, not much to see here but most people chose to get a bus, coach or taxi to Amsterdam or in our case Haarlem. It took a while to get there what with waiting for the bus and the journey itself, and I was beginning to wonder whether I was really going to enjoy this. It was worth it in the end though as we spent a few hours exploring a pretty and popular tourist attraction, and watching the world go by from a sunny spot at a bar in the main square.

All at Sea
The next leg was a full day at sea sailing up the coast all the way to Flam. After a disappointing buffet meal the night before and a pretty horrible breakfast we were wondering whether this was going to be as good a holiday as we’d hoped. We cheered ourselves up though by steadily working through the cocktail menu (though I drank mostly lager). We managed to get ourselves into the proper restaurant for the next meal and I have to say that once we’d worked out when and where to eat (there was plenty of choice), the food seemed to get much better.

There was plenty of entertainment on board, some of which was cringe-worthy such as Jurgen and his karaoke murdering of numerous rock and pop classics. The nightly stage shows got off to a good start though with a variety of acts including a contortionist who had us all pulling faces and a couple of  guys who had the audience enthralled with their balancing and lifting skills.

Flam
I was awake early when we arrived in Flam and went up on board to get my first glimpse of the fiords, and it was pretty impressive I have to say. 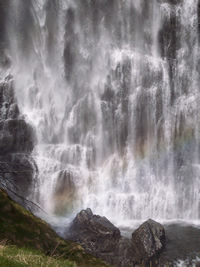 The plan was to get a ticket for the ‘funicular’ railway as there really wasn’t much else to do here. The plan backfired when we found out that the trains had apparently sold out, so we ended up taking a very long walk on a very hot day. The highlight of this was a hard climb up a steep and rocky hillside which we nearly gave up on several times. It was worth the effort though as the view from the top next to the Brekkefossen waterfall was pretty amazing. Many photos were taken!

The annoying thing about our walk was seeing the train pass us later in the afternoon half empty. We guessed that the ‘sold out’ tickets had probably been bought up by the tour operators who had failed to sell all their allotted seats.

Stavanger
Next day we stopped off at Stavanger. This is a largely industrial city but features a beautiful old port full of wooden clad cottages on winding cobbled streets. Once the heart of the port this is now purely a tourist attraction and it seemed everyone on the ship was heading for here so we set off into the city centre first and came back to the old port later on.

We spent most of the time wandering around a couple of museums where we learned all about the Vikings and Norway’s rich oil and gas heritage. I didn’t realise what a rich country this was. We then headed back to explore the old harbour before returning to the ship for a late lunch and a couple of cocktails.

Oslo
As with our other stops on this trip we didn’t get an awful lot of time in each city, and with a place the size of Oslo we decided to jump on board one of the many ‘hop on hop off’ buses so we could see the sites and get off when we fancied it. Most people got off at the first stop though to explore Vigelandsparken, a large public park full of weird and wonderful sculptures. 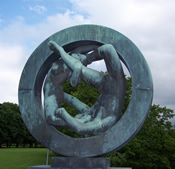 With an eye on the clock we realised there wasn’t a great deal of time left, so back on the bus we went past a number of museums which William was determined to avoid and headed back to the main area of the city; getting off at the trendy harbour area where the young rich people of Oslo gather for lunch.

We knew it was going to be expensive but we just had to stop for a drink at one of the many waterside bars. We each had a small bottle of wheat beer (or brown ale in my case) and paid the princely sum of £48 for the four drinks!

We could have re-boarded the bus for the trip back to the MSC Opera, but decided to walk. We were pretty confident at first but as time began to tick away one or two of us were beginning to panic. Everyone was relieved to see the docks come into view, though we still had time to spare it was a moment of worry we could have done without really, particularly when the tour bus we hadn’t spent much time on had cost us £24 apiece. Very expensive place Oslo!

MSC Opera
The final leg of the cruise was the long journey back to Southampton. A lazy day spent reading, knitting, chatting, and watching hundreds of little islands as the Opera sailed out of the fiords and into the North Sea.

By now I think we’d had a drink, meal or snack in just about every part of the ship. We could have literally eaten around the clock if we’d wanted to as there was always food being served up somewhere. Some of the food was great, other times a bit iffy, but on the whole I have to say it was fantastic value for money. One of the highlights had to be Coral’s nightly debate with the Maitre’D over what her dietary requirements would or wouldn’t allow her to eat. They got a bit heated at times and I think he was a very relieved man on our last night on board!

The one thing which had let the ship down was poor service in the bars, they were simply understaffed and couldn’t cope with the number of customers. It got to the stage some nights where we ordered a whisky and were brought trebles so that they didn’t have to return to our table so often. It’s a good thing we didn’t have a bar tab to pick up, we’d all taken advantage of a special offer for this one and a good job too… our drinks bill alone would  have come to over a thousand Euros! It has to be said that we did get a bit merry once or twice.

Some of the on-board entertainment had been pretty good, especially William’s favourite duo who he’d been ticked off by Coral for ‘whooping’ at one evening. It had been a great holiday and we’d had some real laughs in the bars while availing ourselves of the ‘free’ drinks while on board, but by the last night I think we were all ready for a change of scenery and looking forward to home.

Our first cruise was over… but would it be the last? I very much doubt it!