Our second cruise with Coral and William, the tour of the Adriatic was an adventure mainly set in Croatia, with a brief visit to Slovenia and a stop-off in Venice along the way.

It was an early flight to Dubrovnik, so we travelled down to Doncaster the night before and had a bit of a jolly on the town before retiring to our Lakeside hotel. A beer in the Queen Crafthouse & Kitchen followed by a visit to the Turkuaz restaurant set us up for the week ahead.

Following our flight next morning, we had a short transfer to the cruise ship before unpacking and having a quick snack on board. The Mediterranean weather we had been promised was there to greet us, and we then set off in a local taxi for the afternoon to tour the old town of Dubrovnik. This place is straight out of a movie set, no wonder they used so much of it to film ‘Game of Thrones’. Although it was early in the season, the winding streets of this ancient town were lined with thousands of awe struck tourists, milling around the highly polished stone and marble pavements which left the eyes watering in the sunshine. After an hour or two of exploration, it was inevitable that we eventually found ourselves in a shaded hostelry for the first of many cheers sketches, drinking down a well earned glass of the local Karlovačko lager. We could easily have spent much longer touring Dubrovnik’s maze of mediaeval walkways, but the one down side of cruise holidays, is that there’s always an appointment with a ship to keep. 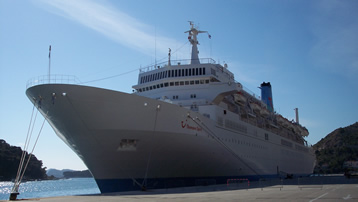 Friday 5th – On board

This was a full day at sea, an opportunity to explore the ship and chill out on deck on what turned out to be another warm and sunny day. We actually spent some time sunbathing on the top deck, reading, and watching the distant coastline slip by. We all agreed that the ship was tired looking and past its best; but it was its last voyage so I guess it’s understandable that money spent on refurbishment would have been wasted. After a while we got used to it anyway and I have to say that the excellent customer service soon made us forget the below par accommodation.

That evening was the gala dinner, where we all dressed up in our finest before lining up for a seemingly endless series of photos, most of which turned out to be not particularly flattering. The dinner was excellent though followed by a great show in the Broadway lounge and a few cocktails and G&Ts.

Our first booked excursion was in Slovenia, and seemingly one of the longest coach journeys ever. Right from the moment we left the ship, the tour guide launched into a stuttering, broken, and non-stop commentary starting with the history of Slovenia before branching off into the most trifling and irritating chatter imaginable. A little voice inside my head was screaming at her to ‘shut the **** up!’! Eventually we arrived at Predjama Castle for what amounted to no more than a 20 minute photo stop. A long journey with little at the end of it and at this point I don’t think any of us were overly impressed.

It was onto the caves at Postojna next, where we made the mistake of enjoying a couple of bottles of the excellent dark Union beer whilst waiting for our allotted time. The exploration started with a 10 minute journey on a narrow gauge open train through floodlit caves, some of which were spectacular judging by the communal ‘Oohs’ and ‘Ahs’ from the army of Japanese photographers who were snapping at every twist and turn. The guide inside Postojna was excellent, and the 45 minute walk through these ancient caverns more than made up for the earlier disappointments. An amazing experience, only spoiled by those beers coming back to haunt me and Coral as we both desperately needed the toilet after a while. I thought we still had another 45 minutes to go and was starting to panic, but to my huge relief we reached an underground visitor centre which provided a very timely stopping point before getting back on the train for the return journey. I’ve never been so relieved to find a toilet!

A short hop across the Adriatic saw us in Italy for our gondola ride in Venice. Another painful journey via the ship’s launch, with our guide chattering nonstop over the sound of the engines and other people’s conversations, but this trip was mercifully short.

The gondola ride was also pretty short, with our gondolier and the one ahead enjoying a conversation over our heads as we were punted around the crowded waterways. It was an enjoyable ride and one I suppose which has to be done when in Venice, but the experience could have been better.

Venice itself, like many of the places we visited on our holiday was a maze of narrow streets opening up onto squares, the biggest of which was St Mark’s where thousands gathered for group photos and selfies. Not the cleanest of cities for sure, and one probably best avoided in the height of summer. The ever present canals, although very picturesque, were not the most aromatic, and the crowded streets and bridges would surely become almost impassable at the height of the tourist season. For me, the best part of this trip was the panoramic views we had from the ship as we left the port at the end of the afternoon. From this vantage point, the ‘streets’ and structures of the city could be seen almost as though we were looking down at a toy town, and some of the views of this amazing place really were breathtaking.

We had a bit of lie in on the Monday as no excursions were booked. Probably just as well, as the evening before Wally the wine water had been very efficient in keeping our glasses topped up during the evening meal, and I think we were all a little bleary eyed. By this point I wasn’t exactly sure what day it was or what country I was in!

Only a small place, Pula’s main attraction was the Roman amphitheatre which was not as cheap as the ship’s notes led us to believe, particularly when we found out that the audio guide was in addition to the entrance fee. We did our own tour instead and spent an hour or so drinking up the atmosphere on a blisteringly hot day.

After exploring the town we settled for lunch in a local café where the owner had earlier tempted William with an offer of cheap sardines and salad. Jill and I opted for pizza, and very nice it was too.

Back on the tour bus for Tuesday and we were off to visit the national park at Krka. Thankfully our tour guide on this one, although still very talkative, spoke much better English and managed to be interesting and informative.

The park was a definite highlight of the holiday for me. There was a constructed walkway through some absolutely stunning scenery, a mixture of still and cascading turquoise waters, filled with wildlife and lovely forest aromas. The only downside was that the visit was far too brief. We were led through at a fair pace and were not given anywhere near enough time to explore this little touch of paradise which was one of the most beautiful places I’ve yet visited.
Zadar was another town steeped in history, brought to life by our guide who led us past Roman ruins and other sites with an entertaining commentary. We finished at the sea front, to sit and listen briefly to the sea organ before returning to the coach.

Split was the most popular of our port stops. Another mixture of narrow meandering side streets opening up into market squares where locals and tourists alike sat to dine and drink. Our first beer stop was in a wide square with a view of the ocean and a cobalt sky above, picture perfect and a great place to relax while sipping a glass of Tomislav. The heat was quite oppressive and became a bit much for William who nodded off in his chair. 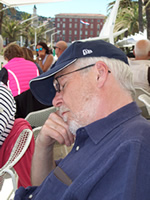 We had a second beer stop on the harbour front which was probably something of a mistake; Coral and I both ordered large bottles of Tomislav before a quick read of the label revealed that the contents were a hefty 7.2% alcohol… not quite the tipple for a hot afternoon in the sun!

It was back to the ship for our final night on board and a disappointing show on ‘Broadway’; the rendition of ‘songs from the shows’ had us looking at each other in puzzlement as we’d never heard most of them before.

Some of the entertainment on board had been great, some not so good, but overall we all really enjoyed our stay on the Thomson Spirit. I wonder what boat it will be next time?