Our year as City of Culture may have ended, but Hull is still seeing some great events which are attracting thousands of people out onto the streets.

Absolutely Cultured, the creative company behind much of Hull’s happenings throughout 2017, brought us an event featuring sounds and images projected onto the city’s architecture.

Queen’s gardens featured a tepee with animated stories projected from within onto the sides of the tent, surrounded by fires which were a welcome addition on a very cold night.

In Hull minster, a giant canvass was hung, and onto this was projected 3D images of landscapes, and also Hull’s own Arctic Corsair trawler could be seen as though making its way through the building like a giant ghost ship. We found it mesmerising. 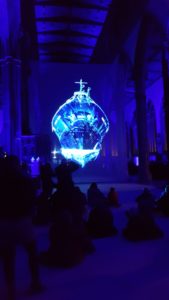 Parliament Street was ablaze with light, the pavement turned into an ever changing kaleidoscope of images and colour, making it look as though we were walking on a carpet. It was an incredible display which we were lucky to see at the right time; on other nights there had apparently been so many people that it was difficult to see the floor.

At the Rose Bowl of Queen’s Gardens, the night was rounded off by watching a fairytale projected onto the walls of Queen’s Dock Chambers and the Maritime Museum. I’m not sure I really got the story but the way the animation made use of the buildings features was absolutely amazing, with character appearing to climb out of the windows at one point.


Overall this was a first class demonstration of art and technology, and a great night out.