This was our first proper holiday for some time; due to lack of time and money caused by running Beer in a Bottle, we’d not really had chance to get away for more than a couple of days. We knew we had little to lose by closing the shop in January and decided we needed a proper break… cue for a trip to the far north of Yorkshire.

We’d both visited Skipton before but never actually stayed here, but it seemed a good base to set up camp so we could explore the area. The ‘cottage’ Jill had booked was a strange three level place, with a bedroom and shower below decks, the kitchen / dining room at street level, and a living room on the upper floor; a comfortable place overlooking the canal. It was freezing downstairs until we realised that there was an under-floor heating system in the bathroom which was so hot we had to stand on towels! Perfectly located with a great butcher’s shop next door, and the Castle pub opposite, it seemed an ideal location. Especially when we discovered that the Castle had Old Peculier on draught.

Our first day was spent mooching around the town itself, the temperature had plummeted and number one priority was to buy a thermal vest and a warm jumper.

The thermals came in handy when we went for our walk into Skipton Castle woods. Snow had arrived, giving the place a fairytale aspect as we walked along the canal. It was a lovely way to kick off our exploration of the area and a good way to work up a thirst for quenching in one of the town’s hostelries later on.

Skipton is not short of pubs, which for anyone who knows us will realise makes it a great place for us to stay. The Woolly Sheep was one of our favourites, A Timothy Taylor place with a roaring (though smoky) fire and an excellent pint of Ram Tam. We had an expensive but superb roast dinner there one night. The Beer Engine was a cracking little micropub which we ended up in several times, and not far away, the Narrow Boat had a good selection of ales too. And all of these only a few minutes walk along the canal from our cottage.

Talking of walking, the Ingleton waterfalls trail was something of an expedition. It was a four and half mile round trip up and down hundreds of steps and past numerous pools and falls; a stunning but exhausting trek. I really enjoyed this but have to say that by the end my legs were about to give up and I was really pleased to get back in the car and head for home. 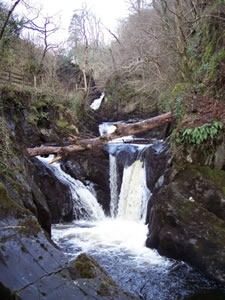 Malham Cove was another day well spent walking the Dales; this really brought back some childhood memories of a visit made back in my school days. The climb up the 400 plus steps to reach the top was a real workout for the lungs, but well worth the effort. We did attempt to walk across the Limestone Pavement but the icy conditions meant we had to pick a safer route.

Our final walk was to Gordale Scar, it was a bit of a trudge at first, but perseverance was rewarded when we got to the end. It’s only when you get to the end that the gorge become visible and it’s well worth seeing. A bit on the dangerous side though if you walk too close to the edge, as the overhanging rocks were unstable in places and more than one came crashing down while we there.