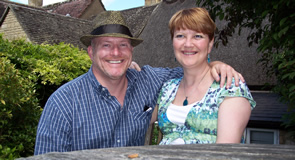 Based in the Thatched Cottage, Chipping Campden in a very old little cottage just off the main road of Chipping Campden, we spent a week exploring the Cotswolds, visiting Stratford, Warwick Castle and Bourton on the Water.

We’d intended to do a bit of cycling in the area, but found the cost of roof mounts and stuff far too expensive. We managed to fit in a fairly long walk though, owing to the fact that the directions were a bit woolly and we got lost along the way. The trusty smart phone came to the rescue with its navigation app leading us back to safety.

We arrived at Chipping on the day of their annual Morris dancing festival, lots of men and women running around in strange costumes doing silly dances. Never quite figured out why grown men want to do this, but I think the beer tankards they kept popping across to fill at the pub may have had something to do with it.

First night there we actually had a night out at Upton on Severn for the blues festival, really enjoyed our visit and saw a fantastic session from The Stumble.

Found the place to be pretty expensive, especially at one of the pubs in a neighbouring village where they charged £14 for fish & chips! They were very very nice though, some of the locals even turned up at the bar for takeaways.

Did a bit of rowing on the Avon at Stratford, not sure that was really a good idea, but at least we made the effort to have a go. Best day of the week was probably the visit to Warwick Castle, loads to explore on a warm sunny day, and all pretty cheap thanks to Tesco vouchers!