We saw an advert in our copy of What’s Brewing for a food and beer festival at Ludlow Castle in Shropshire; this combined several of my favourite things and the temptation was too great to resist. It turned out to be a brilliant weekend.

As a CAMRA member I obviously love beer, but I also love my food, and have long been fascinated by old castles and stuff; this festival combined them all and had the added pleasure of a vintage car rally thrown in! 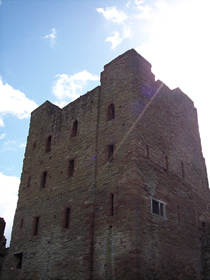 It’s hard to believe that a small market town like Ludlow in Shropshire, can organise such a big festival, and apparently they do this several times a year. Puts cities like ours to shame! Such was the popularity of this event that there was no accommodation to be had in the town, but we managed to book a couple of nights in a guest house in Leominster, just a ten minute train journey away.

We were lucky with the weather, and had a glorious day of sunshine as we made our way through the milling crowds towards the castle.

We’d bought our £6 tickets online so we were able to go straight past the queue and into the beer tent! There were 160 ales on offer, and we found the system in use to be really easy. We could either hand over cash in exchange for money vouchers (a bit like posh monopoly money), or purchase a tasting card and half pint festival glass which gave us the opportunity to try 9 thirds. All the beers were priced to make the exchange of vouchers simple. 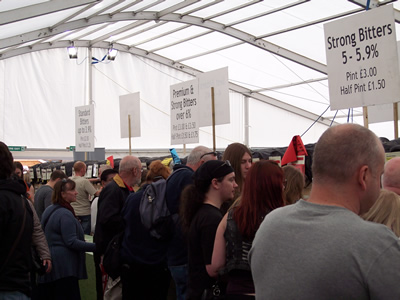 All the beers we tried were spot on, and we soon found ourselves feeling a bit peckish so left the tent to do a tour of the many food stalls outside. The big plus here was that we were able to take our beer with us! The number of stalls was staggering, 70 in all. The event was advertised as ‘beer bangers and bread’ but there was a wide range of snacks on offer… sausages, burgers, cheeses, kebabs, breads, chocolate and ice creams, and a variety of drinks and other stuff. We treated ourselves to some gorgeous and very filling sausage rolls and found a table to sit and watch the world go by for a while.

Next on the agenda was a tour of the classic car rally. Making our way through some of the old castle’s archways (beer still in hand) we had a leisurely wander around a large field filled was cars from every era; from a Model T Ford to modern classics such as the XR3i!

Later on we returned to the beer tent for some more refreshment, and then went in search of something more substantial to eat. Some of the best stuff had sold out though so we had to make do with a shish kebab in a greasy bread wrap.

Eventually, the food stalls were closed off and access to the castle restricted, but many people brought out the seats they’d been using and sat out in the field to soak up the evening sun and have picnics.

Last thing on the entertainment front was music in the beer tent. There had been bands on all day, but the headline act which came on at 7.30 pm stole the show. We had intended to leave earlier than we did but got caught up in the atmosphere, dancing away and singing along to some classic tracks from the ‘mod and post punk’ era of British music.

All in all it was a fantastic day out, and I’d really recommend the Ludlow Spring Festival to everyone. Give yourself a treat next year and give it a go.