Dark grey skies and drizzle kept us company on the road and the forecast didn’t look much better; but who cares when you’re on your way to a beer and music festival?

Organised by Hull & East Yorkshire CAMRA, this is a trip we’ve done once before a few years ago. It was going to be a long day, so let’s hope our ageing bodies are still up to the task!

A 9am start with a couple of pickups, and we reached Keighley just in time to catch the 11:45 train.

Day rover tickets were a bit pricey at £25 considering that it’s only a 5 mile piece of track. This did include entry to the beer festival however; but including our coach fare we had spent £90 between the two of us before even thinking about beer and food.

It was only a short trip to our first stop of the day, a beer and music tent at Ingrow railway station. I was doing my best not to start cracking jokes about ingrown toenails. It was chilly outside but the tent was heated, and we enjoyed a few beers from Wishbone and Nomadic breweries, plus a bacon butty to line the stomach. 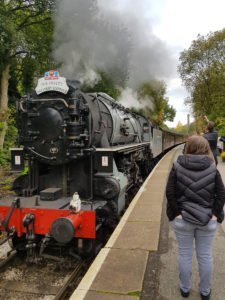 Glasses suitably packed away, an hour or so later it was back on the train, this time a steam driven engine, belching out clouds of dark grey smoke as we headed for the village of Haworth. This was a proper throwback in time, each train door leading to a private compartment, with no corridor alongside. This is the kind of accommodation in which you need to be able to get on with your fellow passengers. The window had to be closed as we went through a short tunnel, to avoid the smoke billowing in; and we almost missed our stop as we were sat on the blind-side of the train when it pulled in at the station, but a swift enquiry to the young couple on our left saved our blushes. 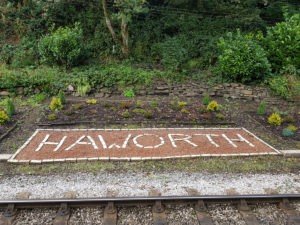 The weather had improved, but it was a long hard climb from the station up to the village, the cold damp air getting to me as our breathing became heavier. By the time we reached the top and took a seat in the Haworth Steam Brewpub, I couldn’t stop coughing and had to resort to my asthma spray, and stepped outside the bar to avoid annoying everyone.  Eventually I got to drink a half of the house-brewed pale ale, a citrusy little number with a touch of biscuit aftertaste.

Across the road we enjoyed a Branwell Stout from Bridgehouse Brewery in the King’s Arms, before descending the hill back down to the train and onwards to the main festival at Oxenhope.

There were plenty of ales on offer in the large engine shed, and a good selection of reasonably priced food. Plenty of people turned up, but despite travelling with a group of fellow CAMRA members we saw little of anyone else throughout the afternoon.

Jill succumbed to a tray of curry & chips from one of the vans outside, and after nicking a couple I had to do the same. There’s nothing like a bit of junk food to satisfy those cravings when you’re enjoying a drink, and I also managed to squeeze in a rather nice roast pork and stuffing sandwich later.

Although there were in excess of 130 beers to choose from across the festival, the selection we tried was pretty small to what we might normally get through, both of us taking it pretty steadily. For me the two best beers I had were Lord’s Brewing The Bandon Car Porter, and Nomadic Beer’s Peeler, a US style IPA. 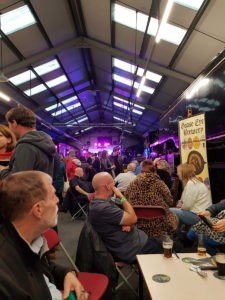 When the time arrived for the train back to Keighley, Jill and I had both used up our beer cards and had managed to stay pretty sober, although there was still time for one more beer as we met up with the crowd at the Boltmaker’s Arms, where we enjoyed a lovely pint of Timothy Taylor’s Ram Tam, for both of us I think, the best beer of the day. Then it was back onto the coach, a cheese sandwich, and a snooze as we returned to Hull.

I don’t know how much we spent overall, but it was a pretty expensive day. We’d hoped for a bit of a catch up with friends and were disappointed to have spent most of the time on our own. It was still an enjoyable day overall, but was it really worth the expense? Probably not unfortunately.

Find out about the Keighley & Worth Valley Railway.