We’ve seen The Stumble three times before, and each time they’ve put on a great show of good old-fashioned blues. In fact I’m sure each performance has been better than the last so we were hoping for more of the same.

Bury is also a bit of an old-fashioned town, not a great deal to offer as far as we could tell, but we’d found a promising sounding real ale bar by the name of The Trackside. It was two miles from the Travelodge, but we decided on a steady walk as the weather was fine and we wanted to do a bit of exploring.

The walk took us alongside a river for a while, before diverting into a series of housing estates and eventually into the town centre. There was a huge market which led into an even bigger shopping centre: for a small town Bury certainly has no shortage of places to spend your money.

Having worked up a thirst, we reached the Trackside bar, not surprisingly, it was actually at the side of a railway, but what did surprise us was that there was a steam rally on for the weekend. We spotted a train which was sending gouts of smoke into the air, and tried to get a view of it by walking to the end of the car park where our view was largely blocked by fencing. This proved to be a waste of time however, when we discovered the Trackside bar opened up onto the platform anyway. There was a huge queue at the bar, so we firstly went out to have a closer look at the train, there was more than one and the platforms were buzzing with atmosphere and a whole gaggle of geeky train-spotters. Returning to the bar the queue had now gone, so we purchased our ales and managed to find a seat on the platform to watch the comings and goings of the trains. It was a really enjoyable afternoon, only slightly marred by having to go for a rubbish meal at a nearby Wetherspoon’s. 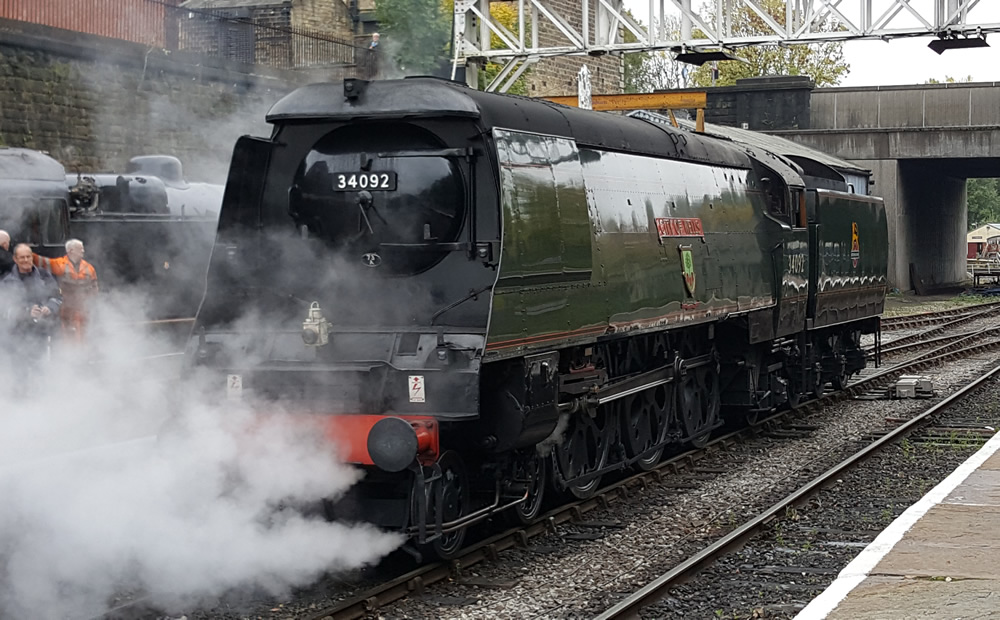 Later on, we hit the Met, for yet another superb show from the Stumble, the performance was brilliant, with saxophonist Simon doing his customary walkabout, this time bravely going up and down the central stairs. I’m not sure if there was some kind of time curfew, but the show did seem to end far too soon. They only did one encore and there seemed to be some doubt about whether they would do that, but we certainly didn’t leave disappointed.

Next morning we returned to the town centre in search of breakfast, we were keen to avoid the ‘spoons’ and instead found The Bloom on Market Street. A small independent place, the service was incredibly slow despite that fact that the place was mostly empty. The breakfast was worth the wait however, not your usual bacon and eggs, but a tasty treat including chilli beans, homemade rosti, sourdough toast, and all quality ingredients.

After a wander around the town, we made a return visit to The Trackside later on to meet some of Jill’s relations, who had coincidentally booked onto one of the steam trains for a Sunday lunch. We had noticed that the East Lancashire Railway also did a Pullman style evening dining experience at various times during the year, and we made up our minds to return at some point, to don our glad-rags and give ourselves a treat by booking ourselves aboard for a summer trip in 2019.