Well where do I begin? Sometimes luck plays a part in life, whether for better or worse. Sometimes decisions are made which are later regretted, and sometimes taking a chance can pay off. But the decision that Jill made a few days ago to bid in the Dove House Hospice fund raising auction for a pair of Ashes tickets turned out to be one of the greatest.

Jill has little interest in cricket, though since being with me, some of my enthusiasm has rubbed off on her. When our friend Donna contacted her to let her know that two tickets were up for grabs, and my birthday being imminent, she didn’t hesitate to throw a £100 bid in.

When I received the text from her to tell me what she had done, I didn’t know how to react. England had been skittled out for a pathetic 67 runs in their first innings, the Aussies where piling up an unassailable lead in their second innings, and I was sure that the game wouldn’t even last into the 4th day. At best, we would be witnessing England prodding and poking in vain hope of securing a draw. I tried to tactfully explain to her, that although the gesture was really appreciated, I feared that the money would be wasted; because if there was no play on the Sunday, we wouldn’t even be able to get a refund as the tickets had not been bought in our name.

“Oh well,” she said, trying to be positive, “The money’s gone now so let’s just write it off and not worry about it!”

I felt so ungrateful! But then came Saturday. I decided not to watch cricket as it was a gorgeous day and we sat in the garden planning a barbecue. I followed the game on my phone and groaned as I witnessed the early score.

“How many runs have we got for that wicket?” she asked.

I sensed impending doom, but nevertheless kept an eye on the score throughout the day. Joe Root and Joe Denly dug in and although the latter fell before the end of play, the score had been carried to 156 for 3 at stumps.

“How are we doing?” Jill had asked at one point.

“Sh!” I replied, not wanting to tempt fate and the fickle gods of cricketdom. I’m not superstitious about anything in life… except when it comes to the Ashes. For some reason it affects me so much more than any other form of sport. I realised that we needed to get some train tickets booked.

That evening we booked an 08:40 train to Leeds, with a connecting train to Headingley, and although I’m not normally one to get excited, I went to bed feeling like a kid on Christmas Eve.

The next morning we realised we hadn’t given ourselves quite enough time. We rushed to do a bit of pack up, and almost left without the tickets; but managed to catch the bus in time.

We arrived at Paragon Station only to find out that the train had been cancelled! Our alternatives were to wait another hour, or to get the next train to Selby and change for Leeds. We took the second option, only to find out the train from Selby had also been cancelled! There were quite a lot of us making the same journey, and we all waited nervously for the next train which would get into Leeds with only minutes to spare for the Headingley connection. We practically ran across the station and over to platform 1b to find out that the train had been delayed.

A short while later, a guy called across to us all to announce that there was a bus outside which would go as soon as it was full and would take us straight to the ground. We rushed outside and queued to get on, but by the time we got to the front the bus was full. We all rushed back into the station rather than wait the promised 10 minutes for another bus to be called in.

The train had been delayed even further, and the information board showed that there would only be two carriages. I looked up and down the platform and suggested to Jill that we get a bit nearer the platform edge. How train companies can provide a service as appalling as this on the day of a major sporting event was beyond my comprehension. I did my best to appear calm, but inside I was really starting to get wound up.

Finally we disembarked at Burley Station, and hundreds of people made a dash to the stadium, which of course, was mostly uphill in nearly 30 degrees of baking sunshine.

Thankfully we had only missed around 15 to 20 minutes, and nothing much had happened. We bought ourselves an overpriced and under par pint of Tetley’s before making our way up onto the first balcony concourse. It was lovely and cool under there, and we stood for just long enough to finish our drink and watch Joe Root fall to a great catch from a spinning ball behind the wicket with little added to the overnight score.

We took our seats after a tiring climb to the upper tier; a long way up but still a great view. The Western Terrace to our left was in great voice and the atmosphere was unbelievable. 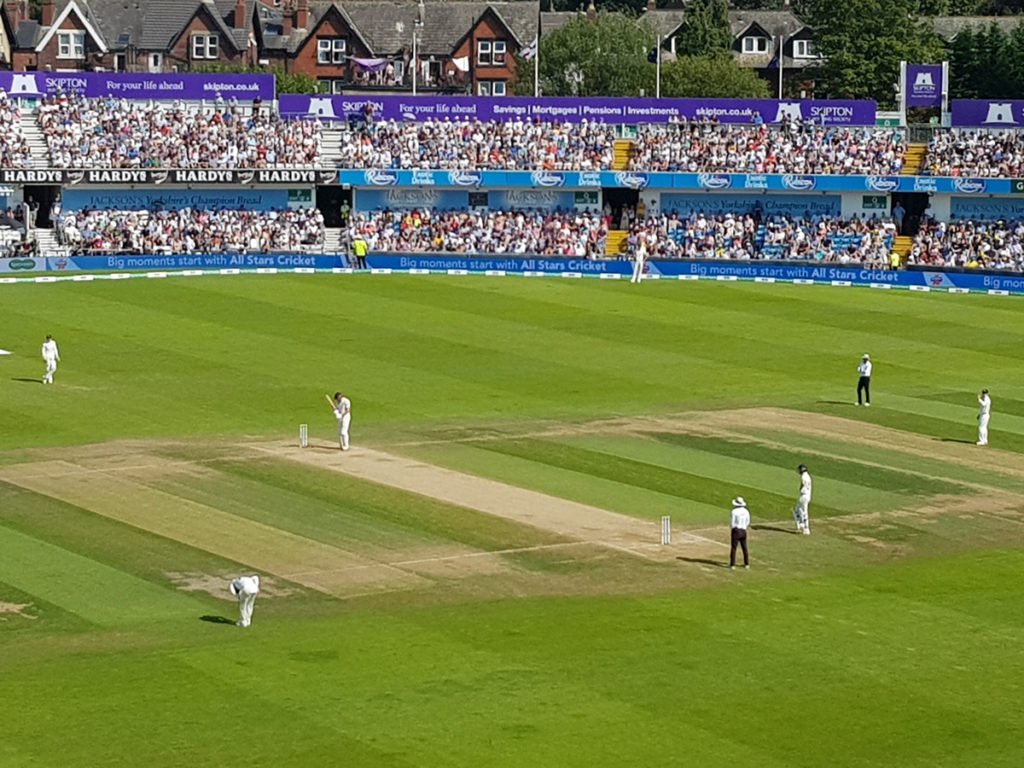 Stokes and Bairstow steadied the ship with a fifth wicket partnership of 86, and until Bairstow edged to a slip catch off Hazelwood we really thought we had the game in the bag, despite the required 4th innings total being England’s biggest in history.

But then followed a steady fall of wickets, a suicidal run out of Butler, a soft catch from Woakes, and Archer who had shown some promise with the bat, getting carried away and holing out to a needlessly attempted six on the boundary. After the dismissals of Butler and Archer I was resigned to the fact that we had blown it, and when Broad went without scoring the writing was on the wall.

Needing 73 more runs with only our tail-end batsman Jack Leach left, it was only a matter now of how many runs we lost by. The Australian woman next to me had her camera videoing every ball to make sure she captured the moment the Aussies kept the Ashes. I was tempted to say something but didn’t want to tempt fate; I just kept quiet and waited for the inevitable.

The crowd were going crazy as Stokes went on the offensive, from quiet occupation of the crease early in his innings; he switched into limited over style. He launched a succession of hits up to and over the boundary, sometimes only just clearing the fingers of desperate fielders on the ropes. When he couldn’t hit the boundary, he either clipped for 2 quick runs to retain the strike or refused an easy single to protect Leach from facing the barrage of fast bowling and spin.

When Jack Leach had to face the attack, he defended resolutely, dodging bouncers and blocking solidly to increasingly loud cheers.

Tension soared as a run out opportunity was missed by Lyon, a catch was dropped in the field, and the target grew ever closer.

The Aussie next to me had long since put her phone away.

It was down to 2 runs required with Leach on strike, a quick single was grabbed and the ground erupted! Everyone was on their feet, clapping singing and cheering. The fielders all came in to prevent Stokes nicking an easy single; and then an eerie silence descended as Cummins ran into bowl.

There was a resounding crack as bat hit ball, I’ve no idea where it went but there was no doubt we had won as Stokes and the crowd screamed as one and the stands erupted once more.

I’ve never experienced such an atmosphere in a sports stadium, the cheering and applause seemed to go on forever, and even though the post match presentation was done over the PA system it was impossible to hear them over the noise. 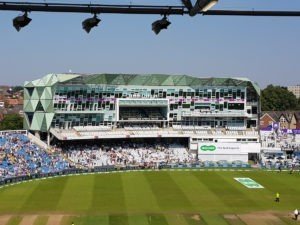 It was some time before we left the stadium, I was still in a state of shock and disbelief and didn’t want to leave in case I woke up and found out it had all been a dream!

Crowds were making their way out of the stadium and towards Burley Station, and when we got there the platform was rammed; I wasn’t sure we would all get onto the train. We waited in the baking heat, watching the time tick away as the delayed train seemed to take an eternity to arrive. But eventually it got there, and the mass of people forced themselves on board, with many having to stand. Thankfully the journey was brief and we disembarked once again into Leeds.

We really didn’t fancy fighting our way onto the next train home, we were tired but still buzzing, and felt the need for a celebratory drink. We ended up in Tapped, one of our favourite hostelries in the area, and spent a couple of hours enjoying a few beers and a pizza before heading back to the station and home to Hull.

We managed to sneak into what I think might have been the first class coach, although there were no signs to indicate it as such other than the fact that it was much quieter than the one we first entered and it had air conditioning and screens showing the progress of our journey.

This will no doubt go down as one of, if not THE greatest test match; but it certainly WAS the greatest day out and one for which I will forever be grateful to my wonderful partner Jill who thought to bid for those gold-dust tickets! 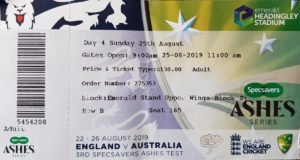