We visited Bury in October last year to see The Stumble at The Met, one of our favourite bands. We were lucky enough to also stumble across a steam railway gala during our visit to the Trackside bar during the afternoon, and who can help but get caught up in the romance of the age of steam?

There were special carriages set aside for evening diners to take a journey, pulled by a steam train while enjoying a black tie evening and a quality meal. Jill said at the time how much she’d love to try the experience, so the cogs of my mind were set into motion, and I secretly planned to treat us to tickets as a Christmas present.

So, yet another weekend away, overcast skies and showers but better weather forecast for later and we’re off down the M62 with our finest togs carefully draped over the back seat.

As we approached Manchester the sky turned black and the rain came down in sheets.

The journey though was uneventful, and by the time we reached Bury the downpour had ceased. It was still spitting and breezy however, so a quick change from shorts to jeans was in order.

Too early to check into the Premier Inn, we had little choice but to head down to the Trackside to blow the froth off a few. The trains were chuffing up and down the tracks, and by the time we were preparing to leave, our dining carriages had pulled up on the platform to take on supplies. 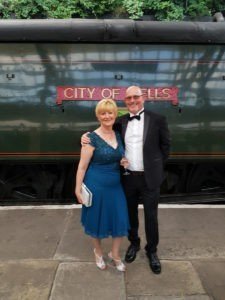 A short snooze and quick shower later, and we were dressed up to the nines and returning to the station; this time bathed in sunshine.

There were already a few there dressed in an assortment of suits and dresses, by now Jill’s earlier self consciousness had evaporated and we were happily soaking up the atmosphere. The Mrs looked fabulous, and a young lady on the platform even took the time to come across and say so!

A couple of aperitifs and then across the platform to the waiting train, where we were greeted with canapés and a horribly sweet wine, which I tactfully avoided as I’d had the foresight to equip myself with a glass of Chimay Rouge.

We were seated near to the galley on the train and it was uncomfortably warm, but that was the only cricitsm; and let’s face it, you can’t expect air conditioning on a vintage train.

We were also entertained by a magician who kept us amused between courses.

We enjoyed a good bottle of Malbec, and I rounded off an excellent meal with a fine cognac.

Two and a half hours later, we were back at Bolton Street station in time for a Southern Comfort nightcap to round off a brilliant evening. I have to say that the premium night dinner is an expensive one, but I wouldn’t hesitate to do it again. A highly recommended fine dining experience.

We didn’t rush back on Sunday, but took a leisurely drive home avoiding the motorways, passing through many towns and villages we’d never seen before. When we realised we were going to passing near to Halifax, we couldn’t resist a short detour to Hipperholme, home to the fabulous Halifax Steam Brewery and their portacabin bar the Cock ‘o the North. We had been here once before on recommendation of the regulars at the old Wellington pub on Hull’s Russell Street, and spent a really good night there working our way along the bar. I think the place could do with a bit of an update now, but it’s still a great place to visit if you enjoy quality cask ale.

Back home (eventually), too late and tired to cook, so we ventured out to our favourite Newland Avenue for a meal and a couple of beers at Larkin’s.