Our friends Pete & Donna had seen a Groupon offer for the British Summer Time event at Hyde Park, Pete sent me a text to see if we fancied going. It was £69.50 per ticket, to see Feeder, Texas, Keane, Black Eyed Peas and Robbie Williams. When I clicked on the ‘What you get’ link on the ad, it stated what you get for your money is amongst other things ‘up to 6 tickets.’ Well if we could get 4 tickets for only £69.50 this looked too good an offer to resist. “Hell yeah,” I replied to Pete. Jill was out somewhere and apparently tickets were selling fast, so I made an on the spot decision and told Pete to go for it.

When Jill later returned we went online to buy tickets, and found out that the ad had been somewhat misleading; although you could buy up to 6 tickets they were £69.50 each. As far as I was concerned though Pete had already got theirs and we decided to buy anyway. Pete rang later to say that he’d not actually tried to buy until Donna had got home from work, and they were having problems with the online form. Jill and I were now thinking about other expenses and were having second thoughts, we suggested cancelling, but there was no option to do so… we were committed!

By the time we had time to think about it properly, to get to the gig in good time we were going to have to travel to London the day before, so train fares, 2 nights accommodation, food and drink; it was going to cost a small fortune. We now regretted making a rushed decision and even thought about just not going.

Luckily, after a lot of searching, Jill found an apartment the four of us could rent, very close to the park. It looked great and was a very good price; TOO good a price as it turned out as the ad on Air B&B turned out to be a scam. Thankfully we got a refund, and were lucky to find a reasonably priced Travelodge not too far away so we had a lucky escape.

Donna arranged the travel, and again we managed to find return tickets which were not as expensive as we’d been dreading, but overall we still laid out a fair bit of cash for something we weren’t 100% sure we really wanted to do. Open air gigs were something we normally avoided.

To make matters worse for me, I later realised that Sunday 14th, the day of the gig, was also the cricket world cup final. I was gutted that I was going to miss it, and tentatively suggested to Pete that he might try to find someone who might buy our tickets.

So, the weekend arrived, Wetherspoon’s for breakfast, mid-morning train, and by the time we’d started on our second bottle of wine we were having a good laugh and were now starting to look forward to it. The forecast was good and the journey passed quickly. 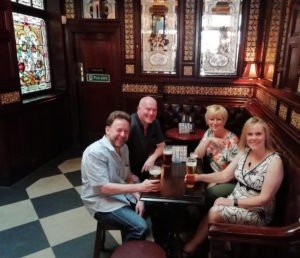 After a quick change at our hotel, we hit the capital’s streets and took in a few beers, starting at the superb Princess Louise on High Holborn, before making our way to a restaurant for a curry. It was a good night out apart from perhaps doing a bit too much walking when we should probably have used public transport.

Sunday’s plan was to take a gentle stroll towards Hyde Park, dropping in on a few hostelries on the way. After the usual navigation confusion, we eventually arrived at the park in good time; already there were thousands making their way into the event area.

There was a great atmosphere; the perimeter was bordered by bars housed in temporary buildings built in 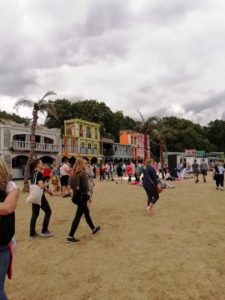 a wild western theme, but every one of them selling the same stuff, lager lager everywhere. On the very far side we did manage to find one single bar which had Lagunitas IPA on draught at £6.50, this meant a lengthy walk through the ever increasing crowd every time we wanted a pint, but at least this was drinkable.

There was plenty of food on offer, but large queues at some of the stalls and the prices were as we’d expected, very high; a small tub of macaroni cheese at £8 and Scotch egg and salad at £7.50 being two of the most ridiculous.

The sound system was good, and for those who couldn’t (or didn’t want to) get near the stage, there were plenty of large screens around. None of us were great fans of Feeder so we just enjoyed it as background music while enjoying a bit of banter, but when Texas came on we were up and dancing (Jill’s favourite band). They played a brief but great set, followed by Keane, who again we didn’t take a great deal of notice of; we took time out for a drink and bite to eat.

Black Eyed Peas were next up, a band I actively dislike; they got the crowd going but I spent most of the time following the cricket on a borrowed phone along with a number of other people around me. There was a nail-biting finish to the game, and as some people’s signals dropped out we were all chewing our fingernails to the bone trying to get information on what was happening.

Finally Robbie hit the stage, the second time we’ve seen him live, and as usual he delivered a stunning set. Fantastic all round entertainment and we were all now really glad that we had made the effort to get there. 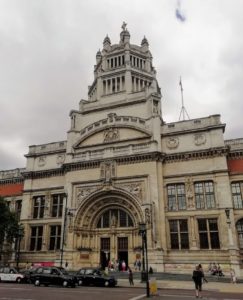 Sunday we had time to kill, as our return train wasn’t until 8:30pm. We decided on a visit to the Victoria & Albert museum, and what a surprise that was! The building itself is stunning enough, fabulously ornate and huge; but some of the exhibits were breathtaking. I had not seen such riches on display since the crown jewels, and there was so much to see that we only covered a small portion of it; return visit planned.

We later popped into a few pubs as we made our way back to the hotel to collect our luggage, and finished off the weekend with another couple of bottles of red on the train home. Overall it was a fantastic weekend, and despite the expense, money well spent.