It had taken a lot of planning to get this trip organised, nephew Paul was determined to get most of the family to Doncaster races on Saturday 23rd for his dad’s 65th birthday treat. But Harry wasn’t to know that we were all coming. A clandestine gathering of the clan.

Initially I didn’t want to go, I’m not a fan of horse racing and I really didn’t think I could merit the cost of this trip for doing something I wasn’t going to enjoy. A couple of special offers on accommodation and ‘two for the price of one’, along with a few elbows in the ribs from family members persuaded me otherwise though, and my name was added to the list of attendees.

I think Harry suspected that something was going on, especially when he popped into Jill’s office one day saying ‘All ready for the races then?” Jill managed to keep a straight face and bluff her way through. Paul tried to put him off the scent by getting Carlos, a friend of Harry’s to call and say that he would be going too, so it seemed more of a lads weekend than a family occasion.

Disaster loomed on the eve of the trip when the snow came, it was unlikely that the races were going ahead.

There followed an intense barrage of Facebook messages going back and forth. Should we go or shouldn’t we? What were the alternatives? Was it safe to travel?

In the end the weather improved enough for us to go, even though the races were off, and I couldn’t talk Harry out of it anyway, he still wanted to make the trip even if only for the night out.

On the morning there were phones ringing everywhere, who is picking up who? What time are we setting off? Can Harry be held up to make sure that everyone else gets there first to surprise him?

We finally agreed on a 12:30 start, with Harry picking me up to go on to Paul’s. Here the delaying tactics manifested themselves in Paul’s ability to string out the ironing of an already ironed short into a marathon event. I kept looking across and thinking ‘I’m sure he’s already ironed that bit!’ But then he mentioned the possibility of waiting for Sarah to come back from the playgroup with Jake. As far as I was aware Sarah had long since left for Donny and even I was beginning to wonder what was going on.

Eventually we set off and had a pretty uneventful journey down, apart from Harry complaining that he hadn’t heard from ‘that bloody Carlos’, who had apparently not been returning his calls!

When we arrived at the hotel everyone was there apart from Tina (of course), and I have to say that the old man seemed suitably surprised, especially when Carlos finally rang to wish him well for the day! 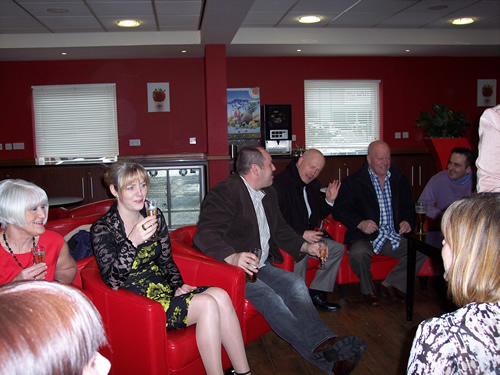 After a coffee break, a quick shower and change and it was taxis all round to the bright lights of Doncaster city centre. First stop at bar Relish.

I immediately regretted putting on a tie and bringing my hat with me. It might have been cold outside but the bar was heaving with sweaty bodies. I also ended up sweating after being charged