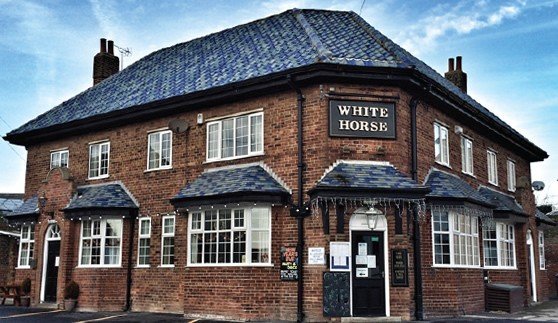 We had been to the White Horse only once before on a CAMRA survey trip, when we called in to sample the quality of the beers. On this occasion, we had come at the recommendation of one of Jill’s friends who had said the food here was good.

Difficult to miss with its expansive blue tiled roof, the White Horse is quite a large place, with two bar areas and a separate dining room, all comfortably furnished.

We received a warm welcome and ordered a couple of beers, Great Newsome Frothingham Best, and an IPA from York’s Isaac Poad. Both were pretty good although the Isaac Poad was a little fizzy. We had been advised to book as the place was very popular, and we were directed to a small table in the lounge.

The menu was quite limited, and although there were three vegetarian options, overall there were only around eight meals to choose from.  I was going to go for the steak and ale pie, but when I saw one arrive at the table next door I changed my mind, the pastry which topped it looked heavy and stodgy.

The waitress arrived before we had fully decided, so we asked her to give us a few minutes. Unfortunately she never came back, and we had a bit of a struggle trying to get someone’s attention so we could eventually order.

Our two roast beef dinners didn’t take long to arrive, and we were both instantly disappointed. The roasties which arrive in a separate dish, looked dry and well overcooked, and the same went for the vegetables; all soft and pretty much tasteless. Yorkshire puddings were average, a little overdone, and the roasties when tasted were as we feared, only just about edible. The only redeeming factor for the meal was the beef, which was lean, tasty and tender, and a couple of new potatoes which were nicely cooked. We had really been looking forward this but both left feeling that we would definitely not be returning.