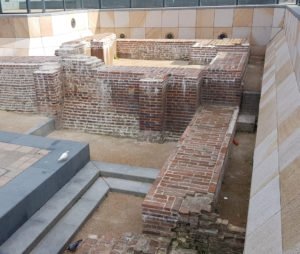 Once a walled and heavily fortified city, Hull has the claim to fame of kicking off the English Civil War when Sir John Hotham (City Governor) and his chaps, decided not to let King Charlie in when he came knocking at the Beverley Gate one day in 1642 (see history).

Hotham was under orders from Parliament to hold the town ‘for the people’ when the crown and the government first began to drift towards war, and although not a staunch Parliamentarian himself, he refused the king entry. Some say that this decision was taken in ‘The Plotting Room’ of Ye Olde White Harte on Silver Street, whilst another version states that this venue was actually the scene for a later plotting of a bloodless coup within the town. Without doubt though, this act was the first open show of rebellion against the king during the Civil War.

The site of this landmark is at the junction of Whitefriargate (the street of the White Friars) and Prince’s Dock Street, standing in the shadow of the Princes Quay shopping centre.

Demolition of the walls began in the late 1700’s to make way for the new docks, which were filled in about two centuries later to make way for Queen’s Gardens. A turret, one of the last recognisable remnants of the city walls suffered the ignominious fate of being used as a public toilet by those who managed to scale its wall in the East Park. It now though enjoys a peaceful retirement on the Victoria Dock estate.

Hull City Council in its ignorance were actually considering filling in the area and hiding of one the city’s (and the country’s) most important historical sites. A petition was launched and early in 2016 the remains of the gate were given legal protection on the advice of Historic England. The original brickwork however has since been hidden under an unsightly layer of artificial looking brick cladding, partly to preserve it against mindless damage from vandal and countless children using this important historic site as a climbing wall.