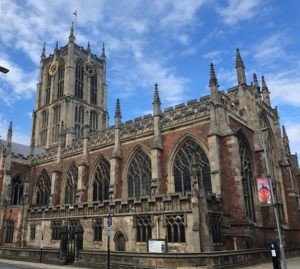 Hull’s 272 feet long church of the Holy Trinity was considered the largest parish church in the UK. Not because it’s bigger than all the other cities’ places of worship, it’s just that it hasn’t got round to being called a cathedral yet! It was however, awarded the status and name of Hull Minster, granted by Archbishop John Sentamu in November 2016.

The building is currently undergoing restoration, but still has a lot to offer any visitor in search of a bit of architectural craftsmanship. It apparently has sections of what could be the earliest known examples of brick building in the country. Its origin, like much of Hull’s history is shrouded in the murky mists of time.

First mentioned in 1204, but the present building may have been started some time around 1285. It has certainly been around since the start of the 1300’s, when a licence was granted for a cemetery on the site to the Prior of Gysburn. Gysburn was patron to the church of nearby Hessle, which served as the ‘mother’ church to what at the time amounted to no more than a scattering of small settlements conferred with the title of Kingstown-upon-Hull by King Edward the first (see history). The Holy Trinity name is closely linked no doubt with the city’s ‘three crowns’ coat of arms. 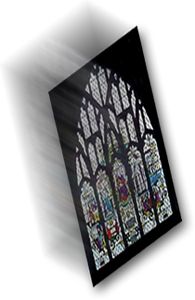 (Right) One of the Holy Trinity’s many stained glass windows – this scene commemorates the granting of Hull’s first royal charter of 1299.

During the Reformation of Henry VIII in 1534, the ejection of the friars from the Holy Trinity, along with the nearby monestaries in Whitefriar and Blackfriar Gates, sparked off a major assault upon the fortified city of Hull. Some 50,000 men led by Robert Aske of Aughton and William Stapleton, gathered on Market Weighton Common to lay their plans before marching on the city. A long seige ensued, but with the harbour controlled by the attackers, and much support for the cause coming from the inhabitants of the city themselves, Hull was eventually surrendered to the pilgrim army on 20th October 1536.

One of the Minster’s claims to fame, is in being the place of baptism of William Wilberforce, the abolitionist of the slave trade, whose Hull home can be visited not too far away on the mediaeval High Street.

Another unlikely claim to fame, is that in 2013, the Hull CAMRA beer festival was held here. It remains one of the best locations for a beer festival to this day and has been held there each year since.

The frontage of the church became a busy venue on market days after the opening of the indoor market hall in 1887. The indoor trading on North Church Side still flourishes after undergoing an extensive makeover to be reborn in 2018 as The Trinity Market, specialising in food and drink, but the outdoor market is sadly no more. 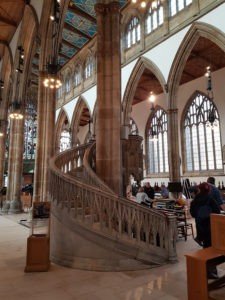 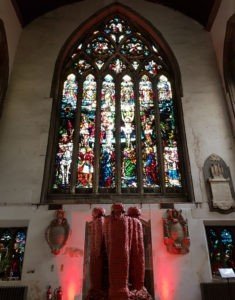