Pave was probably the first cafe bar to hit the streets of Hull on Princes Avenue. It’s since become something of an institution for the more ‘arty’ type of customer, due to its regular featuring of live music (often jazz) on Sunday afternoons, as well as featuring the work of local artists on its heavily perforated back wall. 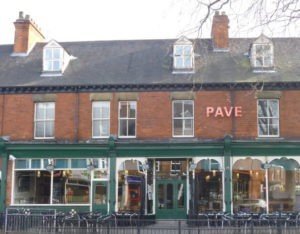 At one time it did become a pretty grotty establishment, with dirty tables, uncollected glasses, and staff who didn’t care about the state of the toilets; though I’m pleased to say that since a change of ownership the place has been turned around. It could still do with a bit of a make-over, but at least it’s now clean and tidy and we’re no longer worried about the thought of eating here.

Pave has five hand pumps on the bar, three of which regularly change, and although the selection of ales in usually not very exciting, the quality is always very good. They also have a selection of kegged ‘craft’ ales and a wide choice bottles and cans, so there is always something for the discerning drinker.

It’s been a long time since we ate here, and we only treated ourselves to a fish finger sandwich on this occasion, but the food was very good, well presented, and the chips appeared to be real rather than the standard issue frozen stuff many places offer. Other food which we saw coming out also looked good, and plenty of people were eating.

If there’s one thing that lets Pave down (actually there are two), it’s that it is cold and draughty. The door at the rear of the bar is often left ajar by smokers going outside, and when the front door opens the wind blows straight through; which bring us to the other problem. Smokers do tend to huddle in doorways, and every time the door opened it was impossible to avoid the stench of smoke coming in, which I hate at the best of times, but it’s certainly not pleasant when you’re eating. I was also very disappointed to see that the staff did nothing to discourage people on an adjacent table vaping; there were clouds of sickly smelling vapour regularly filling the air.

Our main reason for this visit was to see the band, and were it not for them we wouldn’t have stayed for so long. I didn’t take my coat off despite the place being busy, and the constant annoyance of smoke drifting in was annoying. I really want to like Pave, but they will need to make some changes before I’ll be tempted to go back and spend more than a short time in there again in the future.