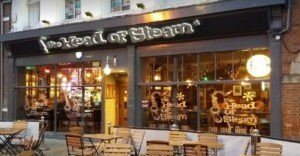 Head of Steam is a pub chain which we first came across in Huddersfield, when at the time it was an independent company.  It has since been sold to Cameron’s which for us, is bad news on the beer front. At first we were quite excited when this pub opened up in Hull’s marketplace, but we soon found out that the limited choice of ales on offer, both real ales and keg ‘craft’ was often quite disappointing.

The redeeming factor initially, was that the Head sold great burgers from the kitchen of Beverley’s Kerb Edge, a company which started out in an old Citroen van. Unfortunately however, that partnership has ended.

When we called in on this occasion, we were both in the mood for a burger and the pub had some interesting looking choices, although southern fried chicken or beetroot carrot & sunflowers seeds in a bun cannot be called burgers as far as I’m concerned, surely they’re just sandwiches? There was also a range of pizzas, hot dogs, and a few ‘pub classics’.

We both went for the Head of Steam burger, which was described as ‘Double stacked beef patties, US cheese sauce, pickles, lettuce, tomato, ketchup and US mustard’. The initial taste of these was really good, but they were let down by the somewhat solid texture of the burgers, which were clearly machine produced and over processed. The buns were not up to the job, once we had bitten into them a few times, the effect of the sauces turned them into a soggy mess, and it was really only possible to put them down and finish them with a knife and fork. On the plus side, the accompanying skin on fries were very nice.

The  two burgers, both with sides of fries and a pint and a half of cask ale came to just under £26, not a bad price for this kind of meal, but we both agreed that it wasn’t one we’d be likely to have again. There is no shortage of places selling burger meals and there are some offering a much better standard than this.