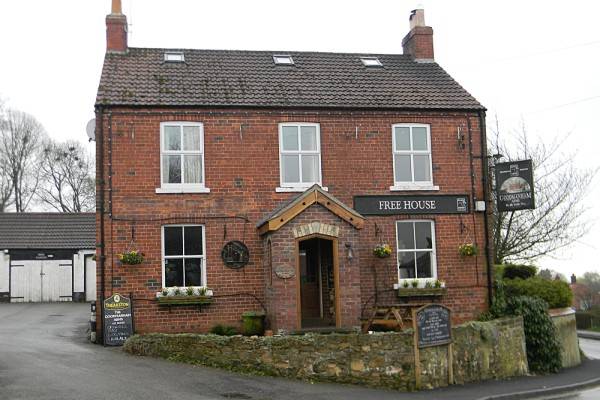 I find if I try to say the name of this pub too quickly I tend to run on with the ‘ham’ and end up almost launching into the old Muppets theme tune (manamanam, der der… de de de), so I like to call it the Arms at Goodmanham instead.

A popular place with Good Beer Guide voters, the Arms is a ‘locals’ pub, and when we arrived on this Friday night there were plenty of them gathered around the bar; I think the ploy is to try and prevent us foreign invaders from getting served so we might ply our trade elsewhere!

When the fires are burning you can smell the place from afar, and when we first entered the pub the heat and wood smoke was a bit overpowering. Although I love a real fire on a cold winter’s night, I think landlord Vito’s idea of having all three grates ablaze was a little bit much on this night and we arrived back at home later on smelling as though we’d been barbecued.

There is a very cosy atmosphere at the Goodmanham, though I think it could do with a bit more lighting. When stood at the bar it was almost impossible to differentiate between the coins I had in my hand and fair bit of guesswork went into what I was handing over.

The beer choice is usually very good, we were disappointed to have missed the All Hallows (pubs own brewery) Pegfyfe mild which had sold out, but there was a ‘Crazy Festive Ale’ on sale which I tried instead. A strong seasonal beer with a touch of festive spice, this went down pretty well. I wasn’t sure about having a second one though, but my favorite Old Peculier had also sold out so I came back from the bar with another one anyway. We would normally have stayed a little longer than we did on this visit, but the heat and atmosphere was in danger of making us nod off, so we heading back into Hull to finish off our night in the Rising Sun on Mizzen Road.